Researchers at the Tow Center for Digital Journalism at Columbia University share their findings and analysis of new studies looking at how eyewitnesses, media organizations and audiences produce and consume user-generated content.

When a major news story breaks, these words pop up on social media platforms so frequently it’s a wonder they’ve never started trending.

The reason is simple — the concurrent rise of smartphones and social media platforms has created a situation wherein the people that happen to find themselves in the vicinity of a vehicle crash, a fire, or perhaps an explosion are likely to be the first ones to capture the images needed to tell the story.

This content — typically referred to as either user-generated content (UGC) or, our preference, eyewitness media — is a phenomenon. And it is evolving at an eye-watering pace.

Journalists need this content. Their audience demands it. But many news outlets are struggling to master the workflows required to discover, verify and clear it. Consequently, a great many rely on agencies such as The Associated Press to do the heavy lifting in this area.

But as anyone operating in this space will attest, a number of challenges remain. And while a lot of great work is being done to try and tackle the unanswered questions, no one person or group has all the answers. Collaboration is going to be key.

Research has an important part to play in the ongoing conversation.

For all the talk of impact, too much academic media research fails to break out of the academic bubble and penetrate the very newsrooms it is seeking to understand and critique.

That’s why Claire Wardle, research director at Tow Center for Digital Journalism, and myself, a senior research fellow, have sought to develop research into eyewitness media that is detailed, robust, methodologically sound and all the other things high-quality research should be — but also useful to the industry.

Over the last 18 months or so, we have conducted major studies into the various different aspects that constitute this phenomenon, namely:

- The eyewitnesses capturing photos and videos at the scene of a news event.
- The journalists developing new workflows to discover, verify and clear this content.
- The journalistic news output incorporating it, both online and in broadcast news.
- The audiences consuming this output.

Everyone is aware that eyewitness media has become a cornerstone of contemporary journalism, but our content studies have allowed us to attach hard numbers. For example, during a three-week study of eight 24-hour news channels, studied in November and December 2013, we found 2,115 pieces of eyewitness media. A replication study of eight newspaper websites, conducted over three weeks in August and September 2014, garnered 4,971 pieces.

Of course, these figures hide disparities between individual news outlets, but if anyone was in any doubt about just how much some major news outlets have embraced this content, stories linked to and from the Daily Mail homepage alone contained 2,695 pieces of eyewitness media. That’s 27 percent more than we found in 1,164 hours of TV output from eight international broadcasters. Eyewitness media is big business.

One issue that continues to cause a lot of headaches is permissions. When a story breaks and an eyewitness posts a photo or video to the social web, they are often besieged by journalists seeking permission to publish or distribute their content. This is not the journalists’ fault. It is essential that permission is secured and rights are cleared. Failure to do so could be costly, as Agence France-Presse found after distributing Daniel Morel’s photos from the Haiti earthquake without permission.

One issue AP has already taken steps to eradicate is when multiple people from the same organization are reaching out to the same content creator, thereby needlessly increasing the number of permission requests he or she has to answer (in this example, an Instagram user received and responded to multiple approaches from staff at NBC, CBS and BBC). AP’s solution is to assign a single point of contact to the content creator and to ensure other people working on the story know not to submit additional permission requests, a task made easier by the social media platform SAM.

This is a welcome step in the right direction, but the overall problem seems more systemic. There is currently no other way of securing permission than to join the unsightly scrum — a situation that is surely untenable. One suggested alternative that AP Social Media Editor Eric Carvin says is worth examining is a pool system.

Another issue that is creating a lot of discussion is graphic imagery. This is a problem that affects both journalists and audiences. When graphic ISIS beheading videos reached AP’s New York news desk, for example, Global News Manager Mark Davies nominated himself to view them, partly due to his experience and seniority, but also to protect colleagues from having to do it.

On the other side of the fence, our focus group research laid bare U.K. news audiences’ concerns about graphic eyewitness media. This was such a key finding for us because it came up in multiple discussions without any prompting from the facilitators. With the Charlie Hebdo shootings fresh in people’s minds, many took the opportunity to open up about upsetting eyewitness media they had encountered (often involuntarily) and how it had made them feel. The responses speak for themselves:

From this perspective, two of the attributes of eyewitness media audiences talked about most enthusiastically — authenticity and immediacy — take on a rather less positive complexion. If, as our research found, eyewitness media feels more “real,” intimate and relatable to news audiences, then graphic and/or traumatic content must surely come under even closer scrutiny before being allowed to leave the newsroom.

As one viewer commented, “OMG I can’t ever unsee that.”

Not only do various issues around graphic content remain unresolved — graphic eyewitness media being frequently displayed without due warning, autoplay exposing people to content they would never choose to view, newsrooms scrambling to cobble together policies around vicarious trauma, etc. — but the emergence of new technology is also creating new questions.

For instance, while live streaming technology such as Periscope and Meerkat carry boundlessly exciting potential for the news industry, they also give rise to a whole new range of ethical and practical issues. Take, for example, the Bangkok bombing in August, when a local man with a smartphone used Periscope to live stream the immediate aftermath of the blast. While he received a great deal of praise from viewers (e.g. “This is more real than news thank you for this”), he also came in for criticism when inadvertently broadcasting pictures of what, it transpired, were uncovered body parts. As one viewer commented, “OMG I can’t ever unsee that.” 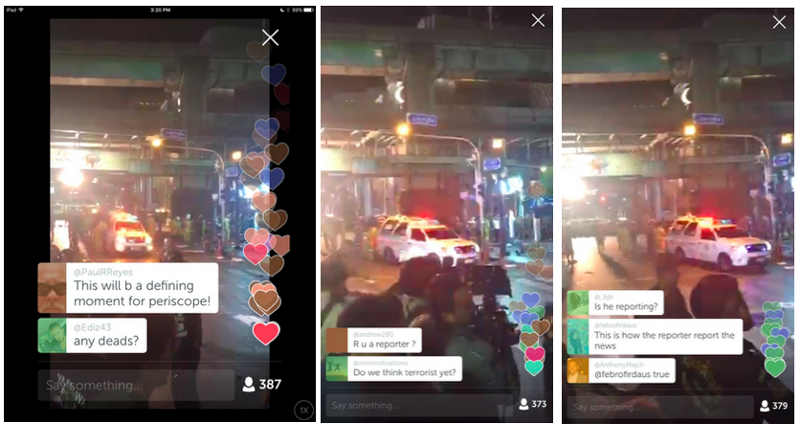 Nobody with an interest in eyewitness media can afford to stand still. For journalists and researchers alike, new questions are emerging all the time. By creating a collaborative forum through which we at the Tow Center can discuss our research and thinking with AP practitioners working at the cutting edge of the industry, we stand a far greater chance of finding the answers.

Pete is a senior research fellow at the Tow Center for Digital Journalism at Columbia University. He is also the co-founder of Eyewitness Media Hub, and has a a Ph.D. from Cardiff University’s School of Journalism, Media and Cultural Studies.

Learn how to grow your audience and get noticed

E-book: What’s the role of journalists in an era of algorithms?